It All Started With Letters: An Ashinaga Poetry Anthology

In mid-2017 we asked Ashinaga students and supporters all over the world to write about ‘education, empowerment” and “what their education means to them”. In doing so, we wanted to create a representative body of work that celebrates Ashinaga scholars and was itself an opportunity to reflect upon and express their own experiences.

Each of the responses we received were remarkable, and we wish we could have included more; but for reasons of space we have limited ourselves to 41 poems from 24 countries – each approaching the topic in their own way. Thanks to those Ashinaga staff, interns and volunteers who gave so much of their time and effort, each poem appears in its original language, as well as English and Japanese.

By bringing together such varied poems and presenting them simultaneously in multiple languages, we hope to celebrate and further impact the lives of young people, and to encourage further contemplation and self-expression surrounding the issues raised.

In fact, 2018’s Anthology has an interesting precedent in Ashinaga history.

In 1968, 10 year old Nakajima Minoru wrote an article entitled ‘My Father is in Heaven’. Published in the Japanese press, and then featured on a popular TV show, Nakajima’s situation and heartfelt response profoundly resonated with the Japanese public. The ensuing national soul-searching that swept through the country was unprecedented, and would go on to precipitate an outpouring of support and concern for orphaned students throughout the country. As a result, the word ‘Ashinaga’ became synonymous with support for orphaned students in Japan, and we have not looked back since.

By spurring the Japanese public into action, Nakajima contributed to a movement which continues to this day. Through Ashinaga’s activities, his work of honest self-expression has gone on to impact the lives of thousands of young people, not just in Japan, but all over the world. Similarly this Anthology does justice to the Ashinaga story; by sharing lived-experiences from some of the extraordinary young people we work with today, this Anthology sets out to live up to the precedent established by Nakajima back in 1968.

Throughout the following works we can see, hear, and above all share in, the experiences of a handful of the extraordinary individuals who are defining Ashinaga and shaping its future. We hope that from this, Ashinaga staff and volunteers can find a source of great pride in seeing the value of the tireless work that they do, and that Ashinaga students can similarly derive inspiration from their many and varied achievements of their peers, but perhaps most of all, we hope you get as much from reading the Anthology as we have in putting it together! 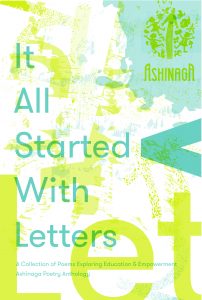